Often called a spirit board or talking board, the Ouija board is a device used to communicate with the other side. It has a smooth surface and is usually marked with the letters of the alphabet, numerals 0-9, and the words “Yes”, “No”, and “Goodbye” though some variations also have the word “Hello” as well. Other than the board, the only other piece is the planchette, which is used a pointer to spell out words using the writings on the board.

The board is used by lightly touching the planchette and letting the spirits guide the planchette to spell out words and answer questions, often leading to terrifying results.

The boards range from beautifully handmade wooden specimens with hardwood and glass planchettes to boards to mass manufactured of printed cardboard with plastic planchettes.

Commercialization as a Game

The board was first commercialized in 1890 by Elijah Bond and filing a patent on the design. Later in 1901, William Fuld, an employee of Bond took over the production of boards and changed the name of the board to the Ouija board, Ouija being a combination of the French and German words for “yes”. 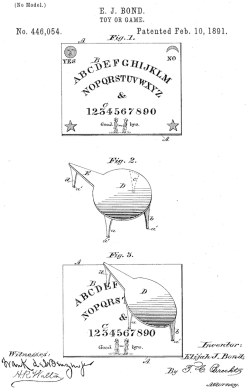 Later in 1907, Elijah Bond tried to copyright the name Nirvana for his version of the board, adopting a swastika as the logo for his new business venture The Swastika Novelty Co.  These boards are extremely rare and highly sought after by collectors.

Fuld rewrote the history of the game claiming that he was the inventor and sued many of his competitors over the name.  Fuld passed away in 1927 at the beginning of a period of extreme popularity for the boards that would last until the company sold the rights to Parker Brothers in 1966. Ironically he died by falling off the roof of a factory that he was told to build while using one of his Ouija boards as told in this article.

How the Ouija Board Got Its Sinister Reputation

It was around this time that  Lee Industries produced cardboard Ouija boards, apparently without legal action from the Fuld estate. Ouija branded boards are currently produced by Hasbro who purchased rights in 1991.

Currently there are many versions of the boards available for purchase ranging from Classic and Glow in the Dark versions produced by Hasbro to artistic handcrafted wooden pieces produced by artists.

Use of the Board

The board is used by one or more person sitting at the board with their hands in front of them, fingers barely touching the planchette that is resting on the board.  Often times there is a ritual, spell, or prayer spoken to initiate the communication, with the participants asking questions in the hopes that spirits or other supernatural entities will answer by moving the planchette across the board to either “Yes” or “No” or to spell out words using the letters printed on the board.

Use of these boards walks a strange line between urban legends and new age mysticism, in fact, urban legends about the dangers of the Ouija board are almost infinite in number.

My friends and I did the ouija board yesterday night… Before we went to the railroad tracks to do it we went to a house that was haunted… The man killed his wife and kids with a pitchfork there… We were planning on going there halloween night and drinking and smoking… Then we did the board…. It said that my boyfriend and best friend were going to die that night if we go to the house… That the dad is a demon and wants to kill my bf and bestfriend… Then it told me I was going to be possessed if I kept playing… So I had to leave. The spirit knew things only one of us knew … But it seemed to really not like me.. My friends and I are trying again tonight to figure out some more answers.

Me and my friends played with one of the Ouija boards last night, We burned the board though…Zozo got angry at us for trying to communicate with her/he.. My friend started shaking, The board spelled “G-E-T” Then it stopped, Then it went on. “O-U-T” “So It spelled Get out? I wanna leave anyways..” My friend said getting up before slamming to the ground. We all..It’s like the spirit pulled him down..The board spelled “S-T-A-Y-W-I-T-H-M-E” We all said “Goodbye” We grabbed the board, Lit a match and burned it. Then we all left. We all were terrified.

Many specifically detail the difficulty of disposing of a Ouija board that has become problematic, often telling of how a friend of a friend had one and burnt it to get rid of it only to find it back in house in it’s normal place at a later time, unburnt; or that you will be cursed and die a horrible death in a few hours.

A Ouija Board will scream if you try to burn it. People who hear the scream have less than thirty-six hours to live. There is only one proper way to dispose of it: break the board into seven pieces, sprinkle it with Holy Water then bury it.

The boards have developed a bad reputation in many religions. The stories of possession and haunting associated with the boards had many parents worried back in the 1960s and 70s and that led to many Hollywood horror films, notably in in The Exorcist (1973) which is based loosely on the story of a you boy who suffered a possession in 1945 after being exposed to Ouija boards by overbearing parents and a grandmother deeply involved in mysticism. In the the film a young girl becomes possessed after user the board and contacting a malicious spirit. There were also films in the 80s and 90s, particularly Witchboard (1986) and its sequels Witchboard 2: The Devil’s Doorway (1993)and Witchboard 3: The Possession (1995) and more recently Paranormal Activity (2007), Ouija (2014) and Ouija: Origin of Evil (2016).

Also recently in the media the show Ghost Adventures supposedly summoned a demon by the name of ZOZO. In recent years ZOZO has come up more and more in relation to Ouija boards.  A little digging shows everyone has heard of the demon, but it’s origins are a little hard to come by.

From a scientific perspective, Ouija boards and many other talking boards work on the principle of ideomotor response. This means that slight subconscious muscle movements translate to the planchette through the touch of the operator(s), however light it is, guiding it along the surface of the board. The movements of the planchette creates a very real illusion of the planchette moving on its own.  This illusion is multiplied when there are multiple operators touching the planchette and it becomes even more difficult to recognize the source of the planchette’s movement.

All the different Ouija boards you never knew existed

The Museum of Talking Boards

One thought on “The Ouija Board”