The Ghostbusters film franchise featured protagonists with post-graduate educations in paranormal fields such as parapsychology leaving (not of their own accord) their positions as professors and becoming paranormal researchers and having wild adventures busting ghosts and terrorizing New York. The question is should you get a college degree in the paranormal.

The short answer is what? Why? No.

But if you love wasting money you can get a really cool title. Students that complete a degree in Metaphysical Organizational Leadership can expect to earn a fantastic living leading their own doomsday cult in less than 3 years. Do you love animals but hate touching them or seeing them in real life? Get that PhD in Cryptozoology from the Metaphysics Institute.

Of course there are organizations that claim to provided the education in the paranormal. Most of these kinds of organizations will happily take your money in exchange for a degree of dubious value, providing claims that you are now an expert in a specific field.

Vice: Interview with the Founder of the Institute of Metaphysics

The reality is that if you want the education for personal reasons, fine do what you will, but if you think there is an illustrious career in the paranormal waiting for you as soon as you get that paper think again.  The types of education that actually benefit paranormal investigation are those with a basis in the sciences.  Cryptozoologists would benefit greatly from the same biology education as a zoologist.  In order to research metaphysics one should have a firm grasp of general physics.  Want to understand those EMF readings while ghost hunting learn about electrical engineering. The first step to finding a paranormal answer to a question is often ruling out the normal. Even Peter Venkman of the Ghostbusters had a degree in Psychology to mirror his degree in Parapsychology.

That being said there are always exceptions to the rule. Dr. Jeffrey Mishlove may be the only person to hold a PhD in Parapsychology for an accredited institution, which he received from the University of California, Berkeley in 1980. Later in 1988 his doctoral dissertation was released in the form of the book Psi Development Systems. As is not the case in most things paranormal, here is actual evidence. 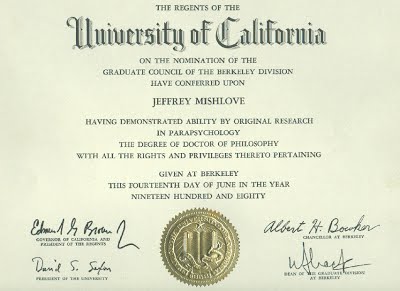 Chip Coffey the TV Psychic from the show Paranormal State has a degree in psychology from Elmira College in New York. In 2002, after studying under Patti Starr at Bluegrass Community and Technical College, he was granted a title of “Certified Ghost Hunter” and began his professional ghost hunting career.

Can you become a prominent paranormal researcher without a (semi)formal education in the the paranormal? Sure.

Zak Bagans of the television show Ghost Adventures when to school at the Motion Picture Institute and art school in Troy Michigan.

Jason Hawes and Grant Wilson of the show Ghosthunters are credited with being being plumbers prior to starting The Atlantic Paranormal Society with Wilson being a web designer prior to that.

John Edward of the show Crossing Over pursued a degree in health care administration before becoming the famous TV psychic.