Hidden amongst the trees at the limits of Maple Hill Cemetery in Huntsville, Alabama lies the Dead Children’s Playground, which in local stories is said to be haunted by the children buried nearby. Maple Hill Cemetery was founded in 1822, though it was only known as “the burying ground” until officially named 1901. Originally built to occupy children while their parents tended to the dead in the cemetery, the playground is tucked away in the woods at the east end of the cemetery’s hundred acres.

Some people believe that it is the spirits of the cemetery’s children that come out to play at night, but another local legend tells of several small children who were abducted around in the 1950s with their bodies being discovered in what is now called the Dead Children’s Playground. 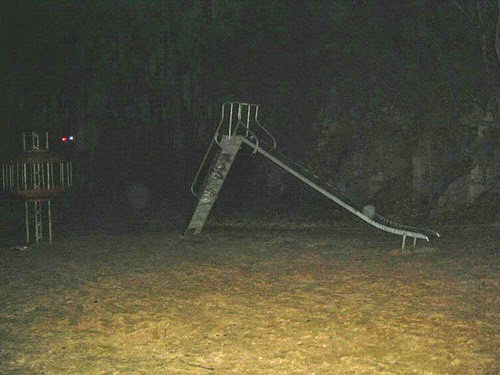 The story goes that between 1945 and 1955 the area the playground now sits was the site of a limestone quarry which stands to reason as the area sits at the base of Monte Sano Mountain near the site of another former limestone quarry, the Three Caves. A series of child disappearances began to be reported in Huntsville around that time and it was soon believed a child murderer was operating  in the surrounding neighborhoods.  When a small human skull was found in the abandoned quarries an investigation turned up several skeletons, along with the bodies of some of the more recently missing children.

The site has long been a favorite haunt for local teens and thrill seekers hoping to catch a glimpse of the paranormal.

Reports of haunting activity range from the sounds of children playing and laughing to the swings of the swing set moving and swinging on their own in sync with one another. Often people photograph orbs, which could be explained away as dust or insects.

In 2007 the playground was designated to be converted to graveyard space. The City of Huntsville came in and removed all of the equipment with little notice and the site was prepared for the expansion of the grounds. The public outcry of the local community was so great it caused the City to cease efforts and rebuild the park complete with new playground equipment. The anomalies that gave the park its name are still said to occur.

A post from June 2011 shows that the site was investigated by the Alabama Paranormal Association.

“The investigation at the Dead Children’s Playground proved to be a hotbed of activity. The combination of probable limestone or quartz rock, the events that seemed to have unfolded there, and the fact that there is a 2 mile wide and long cemetery bordering the playground were probably all contributors to the activity here. Swings moving on their own with no breezes in the air, voices of children and people, apparitions, orbs, you name it, it was there! Most definitely a well deserved location to be on the Alabama index of haunted places.”

So is Dead Children’s Playground haunted? Did you hear stories about it growing up? Have you personally dared to visit it during the night?  If so let us know in the comments.